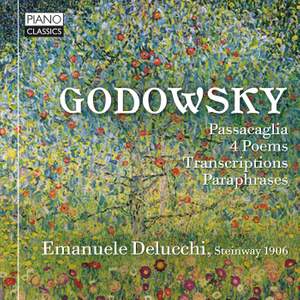 Triakontameron, 30 Moods and Scenes in Triple Measure: No. 11. Alt-Wien, 'Whose yesterdays look backwards with a smile through tears'

Leopold Godowsky (1870‐1938) was one of the greatest and most legendary pianists of the 20th century. As a composer he is most famous for his transcriptions and paraphrases, all displaying a daunting virtuosity. This new recording presents Godowsky’s original work the Passacaglia, 44 variations on Schubert’s Unfinished Symphony, one of the most complicated and difficult piano pieces ever written, as well as a selection of transcriptions of Schubert Songs. The Strauss paraphrases (Wein, Weib und Gesang, Alt Wien) are frequently played concert pieces, a firework display of virtuosity, ingenuity and brilliance.

Pianist Emanuele Delucchi (b. 1987) followed the famous Imola School in Italy, won the gold Medal at the Alkan/Zimmermann Competition and is a champion of lesser known romantic composers (Alkan, Godowsky, Bussotti), “A true lion of the keyboard, a discovery” (Matthias Ross).

Delucchi plays on a Steinway of 1906 from the collection of Marco Barletta, an instrument perfectly suited to the repertoire, from the same time as Godowsky’s compositions.