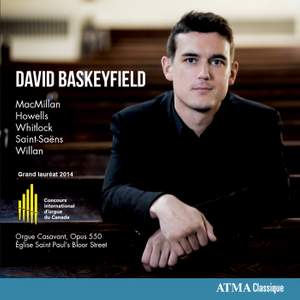 Prelude No. 2 in G Major

David Baskeyfield so impressed a presitigous jury of nine promimnent organists at the Canadian International Organ Competition in 2014 that he was awarded first prize overall, as well as the prize for best performance of a Canadian work. As the winner of the competition, Baskeyfield was invited to record a solo album with ATMA Classique.

Baskeyfield’s program showcases the organ of St Paul’s Church in Toronto—an ideal instrument to introduce the organist to a new generation of listeners. Though the St. Paul’s organ has not been recorded in recent years, it is well known to organ historians.

Originally from England, David Baskeyfield studied at the Eastman School of Music in Rochester, NY, with David Higgs and William Porter. David read Law at Oxford, and as an organ scholar at St John's College, he studied with John Wellingham and David Sanger. Between Oxford and Eastman he spent a year as organ scholar at Christ Church Cathedral and St Patrick's Cathedral, Dublin.

The organ at St. Paul΄s organ was built in 1914 by Casavant Freres, and when composer Healey Willan played for the dedication in April 1914, it was believed to be the fifth largest organ in the world, with 106 stops to the 77 of St. Paul’s London and Westminster Abbey.