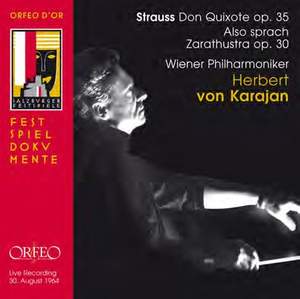 One man who appreciated the late Karl Böhm, and who had invited him to perform during his own time as Festival Director at Salzburg, was Herbert von Karajan. He can be heard now in a programme from his middle period that demonstrates the power of his interpretive art – an art that today seems timeless in comparison. He conducts two tone poems by Richard Strauss. In 'Also sprach Zarathustra' both the maestro and his orchestra offer an unbridled testament to their prowess. The variation work 'Don Quixote' is an even bigger challenge (though the artfulness of its form is just as artfully concealed), and it offers far more humour, too. Strauss might mock his critics in 'Zarathustra', but in 'Quixote' he offers an even more raucous commentary in the shape of a bleating flock of sheep. The soloists Pierre Fournier and Rudolf Streng admirably master the challenges of their parts and whilst Karajan’s live performances are less perfect than his studio productions, they offer far more, even in matters of his legendary orchestral sound.