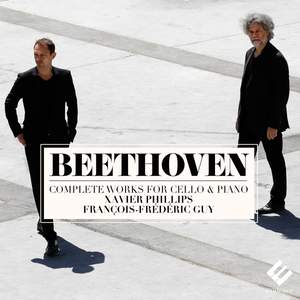 these are really fine, dynamic accounts, with virtuosity appropriately to the fore…Guy and Phillips succeed in plumbing the depths of the latter sonata's middle movement - the only sustained... — BBC Music Magazine, February 2016, 5 out of 5 stars More…

Act III of François-Frédéric Guy's Beethoven Project. On the programme: Beethoven's complete music for cello and piano with cellist Xavier Phillips, recorded by Nicolas Bartholomée at the Arsenal in Metz. In 2008 Guy embarked on a major Beethoven project that has included recording and performing in concert all 32 Beethoven Sonatas and the 5 Piano Concertos. Guy is a dedicated chamber musician and he regularly performs Beethoven’s chamber music for strings and piano as well, with Tedi Papavrami and Xavier Phillips. As part of the Beethoven project, Guy has performed the complete cycle of 32 Sonatas in Washington, Paris, Monaco and recently at the Festival Berlioz in La Côte-Saint-André (August 2013). Born in Paris, Xavier Phillips started playing the cello at the age of 6. His encounter with Mstislav Rostropovitch proved especially fruitful since it marked the beginning of a long collaboration during which Xavier Phillips received the guidance and encouragement of the master cellist.

His eclectic and varied discography has been warmly welcomed by the critics. His last recording – dedicated to Dutilleux “Tout un monde lointain” – received tremendous reviews and was nominated three times for the Grammy Awards 2015. Xavier Phillips plays on a Matteo Gofriller cello from 1710.

these are really fine, dynamic accounts, with virtuosity appropriately to the fore…Guy and Phillips succeed in plumbing the depths of the latter sonata's middle movement - the only sustained slow movement Beethoven wrote for this ensemble

I think this is extraordinary, it’s been a total eye-opener for me, I’ve had great pleasure from the entire set. I think what’s brilliant is that not only do the late pieces come across as total consummate masterpieces, but they bring so much to the earlier pieces as well.

One of the finest aspects of this new set is a sense of absolute rightness about each of the tempi chosen...A wonderful recording of Beethoven’s cello and piano music, one which emphasises the equal role of each player, and how the best collaborations raise the music to a level higher still...It’s a recording that brings this sublime music into your living room in the most natural manner possible.

this recording from Xavier Phillips and François-Frédéric Guy is one of the most admirable I know in this repertoire. The sound is nicely transparent and full of colour, especially in the detail of the marginally more forward cello sound.