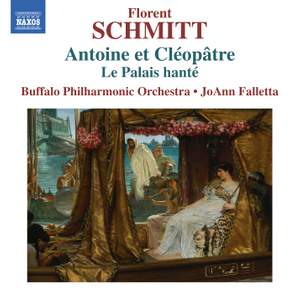 A student of Massenet and Fauré, winner of the Prix de Rome in 1900 and friend to Ravel and Satie, Florent Schmitt had a style that blended influences and inspiration from wherever the spirit took him. His incidental music for Antony and Cleopatra originally formed ballet scenes between the acts, evoking and enhancing Shakespeare’s saga of rivalry between the Roman Empire and Egypt, and the tragic consequences of star-crossed love. Schmitt’s The Haunted Palace follows the nuances of Mallarmé’s translation from Edgar Allan Poe in lush orchestration and a sound-scape of enigmatic symbolist imagery.

Conducted by JoAnn Falletta, the performances are admirably stylish, while the Buffalo Philharmonic boast nicely dexterous strings and woodwind.

exquisitely fashioned and appealingly varied in mood, from intimate to orgiastic. Coupled with a fine version of the doom-laden, Poe-inspired Haunted Palace (easily the most persuasive yet recorded), this makes a fine introduction to a neglected composer