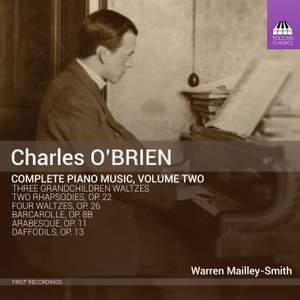 Although O’Brien was a mainstay of musical life in Edinburgh, his attractive, lyrical muse has long since been lost from view there, let alone anywhere else.

His lively music reflects his heritage, mixing grand Brahmsian gestures with echoes of Schumann, all in a clearly Scottish voice.

The Fanfare critic described Vol. 1 in this series as ‘highly recommended. I know I will return to it for pleasure in the future’.

Warren Mailley-Smith has made his solo debuts in Wigmore Hall in London and Carnegie Hall in New York. In 2011 he made his debut with the Royal Philharmonic Orchestra in a performance of Beethoven’s ‘Emperor’ Concerto. He studied at the Royal College of Music and then took further private studies with Peter Feuchtwanger and Ronald Smith. He has received invitations to perform for the British Royal Family, at Buckingham Palace, Highgrove House and Sandringham. He has recorded eight CDs. A review in Fanfare commented of his Chopin recording: ‘His “Revolutionary” Etude and G-Minor Ballad, for example, are quite electrifying, while his “Raindrop” Prelude and Db-Major Nocturne are truly heartfelt and touching’.