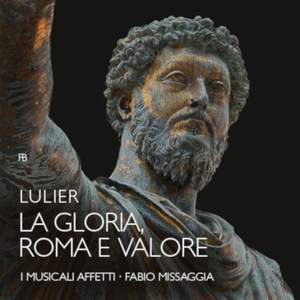 "La Gloria, Roma e Valore" by Giovanni Lorenzo Lulier (1662 -1700) is a solemn cantata for the inauguration of the new Venetian ambassador in Rome. Whoever thought that this is only ephemeral baroque music, is wrong: Often the composers showed what they were able to do, because unlike for example in the Opera House, in the audience were musical experts and potential constituents. The protégé of Cardinal Pietro Ottoboni has really created a small musical jewel, which was convincingly recorded by Fabio Missaggia and I Musicali Affetti.