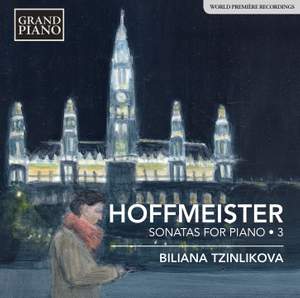 Franz Anton Hoffmeister occupied an important place in Viennese musical and cultural life. He was much respected as a publisher – his firm published works by Mozart and Haydn, and he was friendly with Beethoven – but also as a composer. He wrote at least eight operas, a substantial number of symphonies, and a large amount of music for the flute, a popular instrument amongst the wealthy amateurs of the time. He also wrote expressively and rewardingly for the piano, which had a similarly wide audience. This is the third and final volume in the series of the first complete recording of Hoffmeister’s sonatas ever to be released.

“Tzinlikova is an expressive, capable pianist who plays Hoffmeister’s works with conviction and stylistic understanding… [she] has given a sympathetic, effective introduction to Hoffmeister’s keyboard music.” - Fanfare