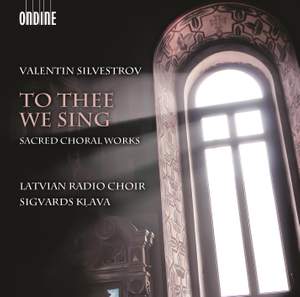 Valentin Silvestrov: To Thee We Sing

The Latvian Radio Choir under Sigvards Klava sing, as expected, with a scintillating beauty. None of this programme…could be labelled technically easy. Fortunately the singers' intonation, balance... — Gramophone Magazine, October 2015 More…

I. The Lord's Prayer

Ukrainian composer Valentin Silvestrov (b.1937) is an important contemporary voice in vocal music. In this new release, Silvestrov’s hauntingly beautiful vocal works are performed by the Latvian Radio Choir under their director Sigvards Kļava.

During his artistic career, Silvestrov has explored a number of musical styles and techniques, such as avant-guard, post-modernism, neo-classicism, dodecaphony, aleatoric writing and pointillism. The fall of the Soviet Union, however, allowed Silvestrov to eventually compose spiritual works, inspired and influenced by his love of the Russian Orthodox Church music which Silvestrov imbues with his own unique sound and bursts of surprising harmonic moves.

Silvestrov’s compositions are invested with the composer’s own unique personality, musical sensibility and sense of beauty.

The Latvian Radio Choir under Sigvards Klava sing, as expected, with a scintillating beauty. None of this programme…could be labelled technically easy. Fortunately the singers' intonation, balance and blend are absolutely first-rate…more please!

one of the finest discs I've ever heard...The basses of Sigvards Kļava's Latvian Radio Choir deserve particular praise - the notoriously sepulchral bottom B flat of Rachmaninov's All-Night Vigil pales into insignificance next to some of Silvestrov's profundo lines, and the combined effect of this, lusciously rich harmonies and some subtle echo effects is electrifying.