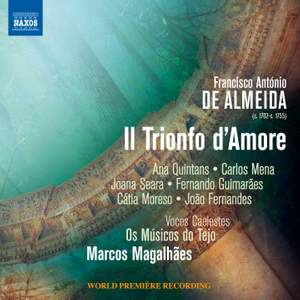 Studies in Rome equipped Francisco António de Almeida for high musical standing at the court of the Portuguese King, João V. Here he wrote a series of admired operas, but also embarked on serenatas, court spectacles of a more private nature.

Il Trionfo d’Amore, a scherzo pastorale, was written to celebrate the King’s name-day. Ranging from intimacy to ceremonial splendour, with several sublime arias, not least the beautiful 'In queste lacrime', as well as dramatic passages, it reveals de Almeida to be one of the outstanding Portuguese composers of the eighteenth century.