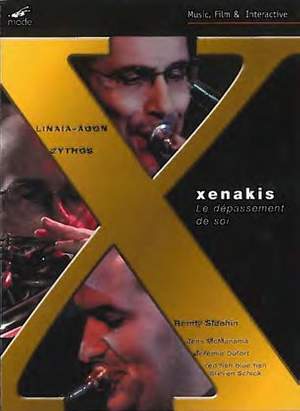 The documents presented on this DVD propose a musical journey through this wide range of topics focused on Iannis Xenakis and his work 'Linaia Agon'. Conceived by the great new music trombonist Benny Sluchin, it is an interpreter’s quest for truth regarding musical creation, a legendary composer and musical performance at the beginning of the 21st century.

'Linaia-Agon' (1972) scored for the unusual combination of trombone, French horn & tuba, was an unduly neglected work because of performance problems in the printed score. Those remained unresolved until a computer interface was developed recently by IRCAM in collaboration with Benny Sluchin. It is a 'game' piece in which 3 musicians, representing the legendary Greek musician Linos [trombone] against the god Apollo [French horn & tuba], battle each via musical strategies in the score. No two versions of this piece will be the same. 'Zythos' is one of Xenakis’ last works. Previously issued on MODE261, this DVD release is the first in surround sound with full video directed by Anton Cabaliero.