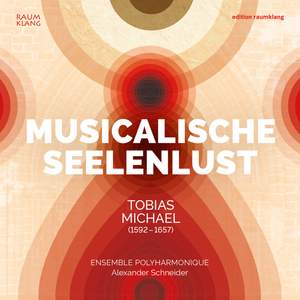 After the death of J. H. Schein in Leipzig, Tobias Michael applied for the position of Thomaskantor in 1630 and apparently had such an outstanding musical reputation that he was elected unanimously by the town council. During his tenure, the choral music blossomed, and the Dresden court composer Heinrich Schütz was so enthralled by the “famous choir” that he dedicated his Geistliche Chormusik to the choir of St. Thomas’s.

Practically only one work by Tobias Michael has been preserved, the Musicalische Seelenlust, which countered the horrors of the Thirty Years’ War with sumptuous harmonies. Elaborate sacred madrigals alternate with small-scale, virtuosically embellished sacred concertos. In his work, Tobias Michael succeeds in combining text and harmony into a Baroque tonal language of great expressivity, which is to be heard for the first time on this inspired recording by the Ensemble polyharmonique (direction: Alexander Schneider).