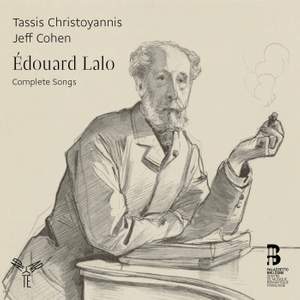 The arrival of a fine melodie singer is always a cause of celebration. Tassis Christoyannis has a baritone voice that moves smoothly from the most elegant, caressing pianissimo, at times reminiscent... — BBC Music Magazine, January 2016 More…

I. A une fleur

Born in 1823 and dying in 1892, Édouard Lalo encompassed this period of Romanticism that witnessed the evolution of the romance de salon genre into the mélodie française or French art song. Injustice of posterity: only Fauré, Duparc and Debussy have acquired true fame in this genre, and yet, Lalo's compositions boast a profusion of ideas and perfect adaptability to aesthetic evolutions. The two scènes de salon for voice and piano (Le Novice and L’Adieu au désert) thus fall within a practice going back to the First Empire, whereas the seven romances (six of which are settings of texts by the excellent lyricist Béranger) stem from a mode that was at its height under the July Monarchy. As for the 23 mélodies written between 1855 and 1890 - some of them on texts by Victor Hugo - they perhaps owe their vocal inspiration to Lalo's marriage to the contralto Julie Bernier de Maligny. This would explain the particular care and quality brought to this corpus, not yet well enough known.

This disc is the second in the series devoted to French song and coproduced with the Palazzetto Bru Zane.

The arrival of a fine melodie singer is always a cause of celebration. Tassis Christoyannis has a baritone voice that moves smoothly from the most elegant, caressing pianissimo, at times reminiscent of Gerard Souzay, to a commanding fortissimo. In addition, his words are the clearest I've heard in this repertory for a very long time, and he uses them with great intelligence…

Christoyannis is an outstanding communicator here, admirably aware of textual and musical subtleties, without over-dramatising. The Hugo settings gleam with wit...Cohen is a fine accompanist, weighty yet detailed, formidably coming into his own in the Béranger Romances...I would have preferred more detailed booklet-notes than those provided, but this is a superb issue nevertheless. It’s essential listening if you care for French song.