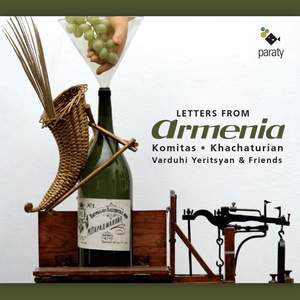 Khachaturian: Dance in B-Flat Major for Violin and Piano

"A composer’s mother tongue is the first music he hears; it therefore determines the “genetic inheritance” of the musician’s sound world. The founding father of Armenian art music was Komitas Vardapet. This recording is released in the centenary year of the 1915 genocide. The pieces in this recital may be animated, contemplative, tender, or solemn, but they are very rarely gloomy or woeful. A sort of trust in the future characterises the “Armenian spirit”. Music is synonymous with hope, it is a way of fighting against annihilation, a tool of resistance. As I contemplate my ancestors who vanished a century ago, I would like this recording to bear witness to the faith in justice that has never fled my native land." Varduhi Yeritsyan