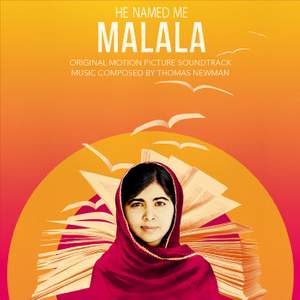 Newman, T: He Named Me Malala

Newman, T: I Am Malala

Newman, T: No More There

Newman, T: Speak What Is in Your Soul

Newman, T: Who Really I Am

Sony Classical release the x28 trk soundtrack to the new feature film, teling the story of 'Nobel Peace Prize' winner Malala Yousafzai, the young Pakistani girl shot on a school bus. Includes the Alicia Keys song "Story To Tell" (written especially for the film).“Tom [Thomas Newman] threw himself completely into the score of He Named Me Malala, suffering every detail, demanding that we get every moment right. What I witnessed watching him in his studio was pure artistry. When sitting and listening to his music for the first time I was overwhelmed by the raw power of his open soaring expression. . .“ Davis Guggenheim (Director/Producer). The original score was composed by Thomas Newman, one of the most respected composers in the movie industry. Newman has scored more than 70 feature films, including American Beauty, Skyfall, Erin Brockovich, The Good German, Finding Nemo and Wall-E for Pixar as well as The Horse Whisperer, The Help and The Iron Lady.