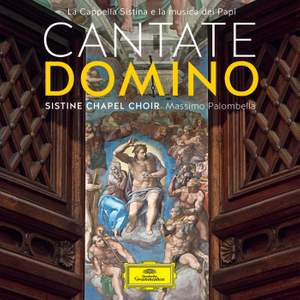 This disc of sacred polyphony and plainsong is an interesting exercise in advocacy for the current Sistine Chapel Choir under its director Massimo Palombella. He tells us the performances will... — BBC Music Magazine, January 2016, More…

For the first time ever, the Vatican has opened the doors of the iconic Sistine Chapel for a studio recording with the Sistine Chapel Choir – the world’s oldest choir. The landmark new album, Cantate Domino, captures the sounds of this extraordinary acoustic, with music performed by the Pope’s own choir. It will be released on Deutsche Grammophon on 25 September.

The album, which was made by special permission of the Vatican, includes music written for the Sistine Chapel Choir by Palestrina, Lassus and Victoria during the Renaissance. There are also two pieces of Gregorian chant, alongside a world-premiere recording of the original version of Allegri’s fabled Miserere (Sistine Codex of 1661) and a Nunc dimittis attributed to Palestrina which is still used during Papal celebrations. Cantate Domino offers listeners the chance to hear these pieces as the composers intended – in Latin and in the surroundings for which they were originally written.

In order to capture the magic, mystery and beauty of this centuries-old music in such unique surroundings, Deutsche Grammophon set up a specially constructed studio within the Chapel. The mixing desk was set up in an ante-chamber, next to the “Sala del Pianto” (where the newly elected cardinal is first dressed as Pope). Grammy-nominated producer Anna Barry described it as an “overwhelming privilege” to be among Michelangelo’s frescoes in the building which is home to the Papal conclaves. The recording sessions were attended by dignitaries from the world of music and of the Vatican including Cecilia Bartoli, Roberto Gabbiani and the Secretary for the Relations with States.

The Sistine Chapel Choir is made up of 20 adult singers and 30 boy choristers. Among the singers are British baritone Mark Spyropoulos, who is the first British full-time member of the choir. The choir is directed by Massimo Palombella, who was appointed to the role five years ago by Pope Benedict. “The music we have recorded was created for Papal celebrations in the Sistine Chapel and by composers who wrote specifically for the Sistine Chapel Choir,” said Monsignor Palombella. “The Sistine Chapel was consecrated in 1483 and has been home to the Papal choir ever since. After an intensive period of study and scholarship of the sacred music in the Renaissance and its aesthetic pertinence, we have

arrived at the point of making the first commercial recording, in this remarkable building, with this prestigious label. It is my hope that these masterworks will touch millions of listeners worldwide, and connect them to the historical culture and deep spirituality of the Catholic Church.”

“This extraordinary choir, which has served successive popes since the early centuries of Christianity, has never before made a commercial recording in its home,” said Mark Wilkinson, President of Deutsche Grammophon. “This very special record has the power, the beauty, and the excellence to find a truly global audience ‒ and an audience beyond the traditional confines and boundaries of classical music.”

Cantate Domino will be officially launched in September during a press conference held in Vatican City, and in advance of Pope Francis’ historic visit to the USA during that month.  His Holiness will receive the very first copy.

The release of Cantate Domino stands as a prelude to the Extraordinary Jubilee of Mercy, a Holy Year decreed by Pope Francis, and which begins in December. During the last Holy Year in 2000, 25 million pilgrims visited Rome and the Vatican.

This disc of sacred polyphony and plainsong is an interesting exercise in advocacy for the current Sistine Chapel Choir under its director Massimo Palombella. He tells us the performances will be dynamic, fluid and expressive unlike the 'black-and-white' visions favoured in North European performances...The chanting of Christus factus est is a revelation, with every inflection implied by the notation executed.