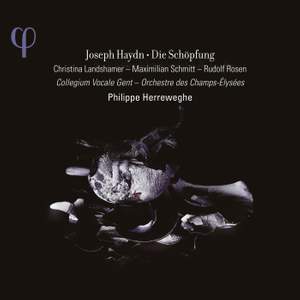 [the music] bursts from the speakers with the same combination of vigour, technical accomplishment and, above all, unforced pleasure in Haydn's cornucopian invention that should make even the... — BBC Music Magazine, February 2016, 5 out of 5 stars More…

After his years in London and the discovery of Handel’s Messiah, which had profoundly moved him, Joseph Haydn embarked on writing a large-scale religious work.

For this very devout composer, this veritable act of faith would torment him for two years and from it would come an oratorio of penetrating intensity.

After enjoying immediate success in Vienna, Die Schöpfung (The Creation) conquered the whole of Europe in less than a year.

With this work, a few months after the release of Die Jahreszeiten (The Seasons), Philippe Herreweghe continues the exploration of Haydn’s vocal works, accompanied by soloists Christina Landshamer, Maximilian Schmitt and Rudolf Rosen.

Thanks to the complicity of two of his favourite ensembles – the Collegium Vocale Gent and the Orchestre des Champs-Élysées – and the extraordinary palette of colours and timbres that he succeeds in inspiring once again, he transports us with refinement and intelligence into the Viennese master’s inner universe.

[the music] bursts from the speakers with the same combination of vigour, technical accomplishment and, above all, unforced pleasure in Haydn's cornucopian invention that should make even the most dedicated Creation admirer listen with fresh ears.

Herreweghe's Collegium Vocale Gent is one of the finest chamber choirs in Europe...This is singing and playing at its finest...Christina Landshamer is radiant as Eve and the Archangel Gabriel; Maximilian Schmitt, not the most mellifluous, makes a stylish Uriel; and Rudolf Rosen, as Adam and Raphael, is wonderfully expressive with the text.