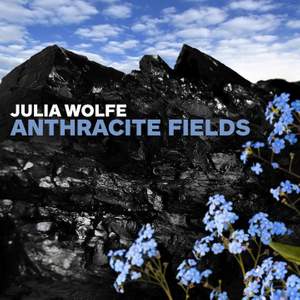 Choir of Trinity Wall Street, Bang on a Can All-Stars, Julian Wachner

Julia Wolfe has always been the moist viscerally demotic of the Bang On a Can composers: she's not afraid to throw electric guitar and rock drums into choral formalities, and controls her folk,... — BBC Music Magazine, January 2016, 4 out of 5 stars More…

Haunting, poignant and relentlessly physical, Julia Wolfe’s Anthracite Fields is a lovingly detailed oratorio about turn-of-the-20th-century Pennsylvania coal miners, and a fitting recipient of the 2015 Pulitzer Prize for Music. NPR Music’s Tom Huizenga describes the piece as “...almost a public history project and a music project at the same time,” which hints at the work’s universal appeal.

Weaving together personal interviews that she conducted with miners and their families, along with oral histories, speeches, rhymes and local mining lore, Wolfe sought to honor the working lives of Pennsylvania’s anthracite region. “It’s not necessarily mainstream history,” she told NPR shortly after she received word of winning the Pulitzer. “The politics are very fascinating—the issues about safety, and the consideration for the people who are working and what’s involved in it. But I didn’t want to say, ‘Listen to this. This is a big political issue.’ It really was, ‘Here’s what happened. Here’s this life, and who are we in relationship to that?’ We’re them. They’re us. And basically, these people, working underground, under very dangerous conditions, fueled the nation. That’s very important to understand.”

Featuring the always adventurous Bang on a Can All-Stars and the renowned Choir of Trinity Wall Street, Anthracite Fields merges multiple styles with classical themes—from the deep, ambient sweep of the opening movement “Foundation” (with the All-Stars’ Mark Stewart wrenching waves of keening sound from his electric guitar) to the high-energy work-song mood of “Breaker Boys.” In the sociopolitically poignant “Speech”, inhumane mining conditions are addressed with Stewart taking the lead in haranguing rock vocals, while “Appliances” reflects with mechanical denouement on the economic results of coal power.

Winner of the 2015 Pulitzer Prize for Music. Commissioned andpremiered by the Mendelssohn Club of Philadelphia through Meet the Composer’s Commissioning Music/USA program.

Julia Wolfe has always been the moist viscerally demotic of the Bang On a Can composers: she's not afraid to throw electric guitar and rock drums into choral formalities, and controls her folk, street and minimalist resources with sassy conviction...The Choir of Trinity Wall Street under Julian Wachner rises to each of the work's myriad styles.

Anthracite is the purest for of coal, the diamond in the rough that is dirty, loud and dangerous to mine - Wolfe's music is never shy about its symbolism...This is social history in music...The writing is confident, the playing slick and the singing is arrestingly unfussy. Plenty of the classic post-minimalist, rock-tinged Bang on a Can trademarks are there.