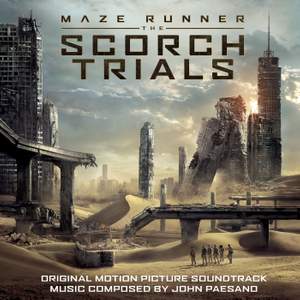 John Paesano: You're Not Getting Out Of Here

John Paesano: A Home For Us

In this next chapter of the epic "Maze Runner" saga, Thomas (Dylan O'Brien) and his fellow Gladers face their greatest challenge yet: searching for clues about the mysterious and powerful organization known as WCKD. Their journey takes them to the Scorch, a desolate landscape filled with unimaginable obstacles. Teaming up with resistance fighters, the Gladers take on WCKD's vastly superior forces and uncover its shocking plans for them all. American film composer John Paesano studied classical music with professor Sally Dow Miller of Conservatoire de Paris, and continued his studies at Berklee College Of Music in Boston, where he focused on composition. On his path to scoring films on his own, he served minor roles amongst some of the industry's most prestigious composers, including Jerry Goldsmith, John Williams, and Hans Zimmer's Remote Control Productions. In 2012 Paesano received an Annie Award for Best Music for his work on DreamWorks’ animated series “Dragons: Riders Of Berk”, which is based on the Academy Award® winning film “How To Train Your Dragon”. Paesano also scored “Ice Age: A Mammoth Christmas”, NBC’s “Crisis” and “When the Game Stands Tall”. Film released @ cinemas nationwide 11th Sept, with extensive marketing.