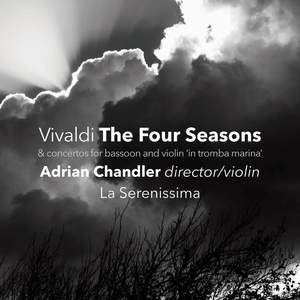 an intensely dramatic account that will add spice to what has for many listeners perhaps come to resemble a dreary domestic relationship…[all] are realised in vivid colours through the agency... — Gramophone Magazine, October 2015 More…

Recording of the Week,  Vivaldi Double Concertos from Adrian Chandler and La Serenissima

Adrian Chandler and his period-instrument ensemble La Serenissima celebrate their 21st anniversary with a vibrant and original recording of the most popular piece of classical music of all time, Vivaldi’s The Four Seasons. Also included are virtuoso concertos for bassoon and the violin in tromba marina, an instrument used in Vivaldi’s day that Ade has had specially constructed for a selection of world-premiere recordings.

Adrian Chandler, who founded the period-instrument ensemble La Serenissima twenty-one years ago, has produced a dozen enlightening, acclaimed and award-winning albums for Avie. He has made world-premiere recordings of rediscovered works by Vivaldi and his 17th-century Italian contemporaries. He consistently applies a unique touch that combines erudition with approachability.

After many years of anticipation, Chandler turns his attention to the touchstone of Vivaldi's concerto output, The Four Seasons. As one has come to expect, he brings something unique to an interpretation brimming with vitality and originality. He has created his own, new edition based on the only surviving manuscript of these works.

Putting this most popular of classical works into context, Chandler rounds out the recording with Vivaldi concertos for bassoon, including the famous La Notte, and world-premiere recordings of two concertos for the violin in tromba marina, a hitherto obsolete instrument that was used during Vivaldi's lifetime, and that he has helped to recreate and bring back to life for 21st century music lovers.

an intensely dramatic account that will add spice to what has for many listeners perhaps come to resemble a dreary domestic relationship…[all] are realised in vivid colours through the agency not of gimmicky extremes of tempo and overly percussive effects but through an intelligent, imaginative approach to bowing, articulation and ornamentation