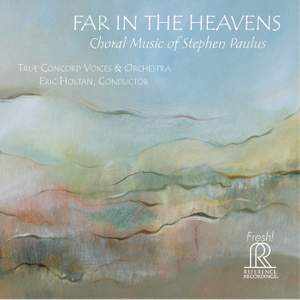 Far in the Heavens

I. They Are All Gone

II. Lord, Make Me an Instrument

V. In Beauty It Walks

VII. Grant That We May Love

Paulus: I have called you by name

Stephen Paulus (1949-2014) was hailed as “a bright, fluent inventor with a ready lyric gift” by The New Yorker. A prolific composer of over 500 works, he wrote for orchestra, chorus, chamber ensembles, solo voice, keyboard and opera. He was a recipient of both NEA and Guggenheim Fellowships. Described as uniquely American, his musical language was characterized as “irresistible in kinetic energy and haunting in lyrical design” by the Cleveland Plain Dealer, while The New York Times praised him for “melodic patterns that are fresh and familiar at the same time” and scoring that is “invariably expert and exceptionally imaginative in textures and use of instruments”. His music is represented on over fifty recordings.

'Far in the Heavens' comprises recently composed and previously unrecorded works by Stephen Paulus, including two works that were commissioned and premiered by True Concord Voices & Orchestra: The Incomprehensible for their fifth anniversary season in 2009, and in 2011 Prayers and Remembrances for the tenth anniversary of the September 11, 2001 tragedy. Grammy-award winner Peter Rutenberg of Los Angeles produced the album, and Mr Paulus supervised the recording in Tucson, Arizona. Tragically, Stephen Paulus suffered a major stroke just six weeks after recording the album. He never recovered, and passed away in October 2014 after being in a coma for more than a year.

True Concord Voices & Orchestra, founded in 2004 by music director Eric Holtan as Tucson Chamber Artists, draws on the first rank of choral and instrumental musicians from Arizona and the United States. True Concord’s artistic mission is to enrich lives through the transformational power of classical music. It accomplishes this primarily through the performance of masterworks and the diverse music of the United States, making its New York City debut at Lincoln Center’s Alice Tully Hall with Paulus’s Prayers and Remembrances in September 2015, and its international debut with this recording. With this album, True Concord seeks to bring together hearts from Tucson with those from around the world, through the power of music by one of America’s greatest and most beloved composers.