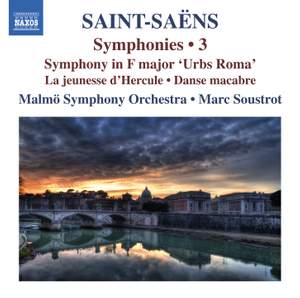 Saint-Saëns’s Symphony in F major ‘Urbs Roma’ was his prize-winning entry to a competition organized by the Bordeaux Société Ste Cécile, but the work remained unpublished in the composer’s lifetime. This early work is notable for a masterly final movement which, unusually, comprises a theme and variations.

The symphonic poem La Jeunesse d’Hercule is a portrayal of the conflict between pleasure and duty, while the Danse macabre is amongst his most popular orchestral works.

This third volume rounds off our new edition of Saint-Saëns’s complete Symphonies, the first two volumes of which having received wide critical acclaim. Volume 2 (8573139) with the famous ‘Organ’ Symphony (No.3) is equal to the toughest competition, with MusicWeb International “immensely impressed by Soustrot’s reading… played beautifully by the Malmö orchestra. Soustrot creates a sense of expectancy that keeps you on the edge of your seat… excellent orchestral playing throughout.” ClassicsToday.com felt that the “second volume in Naxos’ ongoing Saint-Saëns symphony cycle is as good as the first” (8.573138).

With some of the best recordings available of Saint-Saëns’s less frequently performed and recorded symphonies and orchestral works, this is now an assured market leader in a very popular field.