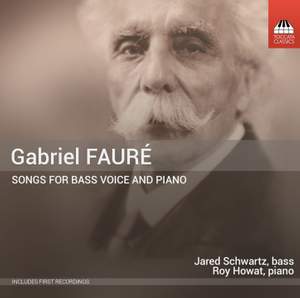 No. 2, Sérénade toscane (Sung in Italian)

This collection of Fauré’s mélodies is the first recording to be conceived for a bass voice. It juxtaposes some of the composer’s best-loved songs with some of his lesser-known works.

Going beyond the often arbitrary ordering of early editions, this programme draws out connections of poets and poetic themes, some of which restore the composer’s own original groupings. This is the first recording to be based on the new Peters Edition, which eliminates countless errors in older publications.

The American bass Jared Schwartz received the 2013 ‘People’s Choice’ Award in the American Traditions Vocal Competition. He is a graduate of Bethel College and the Eastman School of Music. He is also a composer and instrumentalist with an extensive background in piano, violin and horn. His first recording was 'Hope', an album of his original music, for which he both sang and conducted musicians from the Dallas and Fort Worth Symphonies. In 2012 his score for the film 'The Sirens' won the Houston Worldfest Gold Remi award in the Music Shorts category.

Their first volume in this new series was awarded the prize for Best New Edition 2015 at the Frankfurt Annual International Music Fair.