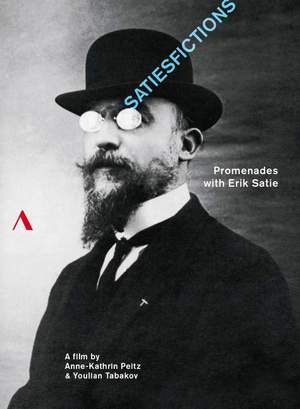 Always armed with wisecracks, umbrella and a bowler hat, Erik Satie was not only on the outside one of the strangest figures in the early 20th century French avant‐garde, he was a composer, designer, church founder, PR pioneer, and master of witty remarks.

In playful episodes, the documentary illuminates the overall phenomenon of Satie. His countless imaginary advertisements evolve into real commercials, and his drawings take on a life of their own as cartoons. Divas, dogs, puppets and children, as well as pianists playing pianos stacked on top of each other are featured in scenic interludes, while performers turn into 'musical furniture' in swimming pools, factories or at train stations.

Interwoven with accounts by Satie’s associates and music experts, the film offers a unique insight into Satie's cosmos of word and sound.