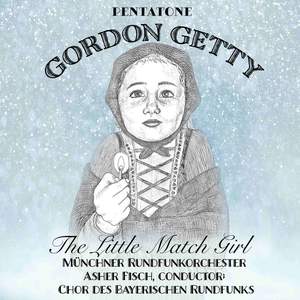 Getty: A Prayer for my Daughter

I. Where Is My Lady

Getty: Joan and the Bells

II. Joan in Her Chamber

III. The Square at Rouen

As is often the case in the vocal compositions of distinguished American composer Gordon Getty, many of the pieces collected in 'The Little Match Girl' are based on, or inspired by, poetry from the nineteenth and earlytwentieth centuries.

It is followed by 'Poor Peter' for tenor, chorus and orchestra, with lyrics by Getty himself inspired by Poe and again Yeats. Then follows the titular 'The little match girl' - the heartbreaking fairy tale by Hans Christian Andersen, put to music more or less word-for-word in a challenging setting for the orchestra and particularly the chorus.

The disc concludes with 'Joan and the bells', Getty’s own narrative of the trial of Joan of Arc, about which he said, “It was the genius of Shaw that inverted this safe literary tradition and brought out the spunky teenager in Joan. Jean Anouilh went farther, in The Lark, and gave her the simplicity of preadolescence. Joan and the Bells owes much to these masters, particularly Anouilh, and takes the same poetic license. It is a tale of a child’s faith in an age without childhood, of a valour undeflected, and of the redemption these qualities commend.”

The disc comes with a booklet containing the complete lyrics to all the pieces as well as personal comments about the music by the composer himself, which enriches the listening experience.