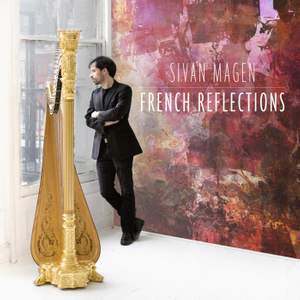 Harp recitals are almost bound to be appealing, such is the instrument’s seductiveness, but this one has substance, too. — Sunday Times, 20th September 2015

For his second recital, harpist Sivan Magen performs some of the greatest French masterpieces written for harp at the turn of the last two centuries.

Since the 1900s, French composers have advanced the harp to new levels of virtuosity and expression, with growing technical demands. Caplet’s Divertissements features some of the most unique and perfectly executed writing in the harp’s entire literature - great technical poise is required to deliver the bold pedal glissandi.

Tournier and Debussy established the harp as a crucial exponent of the dreamy impressionist style - its colours and sonority are key. A century later, Mantovani utilises a breath-taking spectrum of attacks and techniques: furious scalic motives, nail sounds, bisbigliandi, and sudden, shrill fortes which makes Tocar a testament to the harp’s more virile characteristics.

Schoeller’s Esstal is in sharp contrast - its delicate figurations create a more peaceful mood and demonstrate another side to this versatile instrument. The programme closes with Fauré’s Impromptu which makes use of harmonics, glissandi, cross fingerings and rich arpeggios.

Praised by the press as ‘a magician’ (New York’s WQXR), whose ‘virtuoso playing conjures an astonishing range of colour and dynamic’ (The Daily Telegraph), Sivan Magen is the only Israeli to have ever won the prestigious International Harp Contest in Israel.

Magen also won the Pro Musicis International Award in New York and the Borletti-Buitoni Trust’s 2012 Award for exceptional young musicians. He has given solo recitals in New York, London and Amsterdam, and his chamber music commitments have taken him to Paris and New York, as well as several International Chamber Music festivals.

Harp recitals are almost bound to be appealing, such is the instrument’s seductiveness, but this one has substance, too.