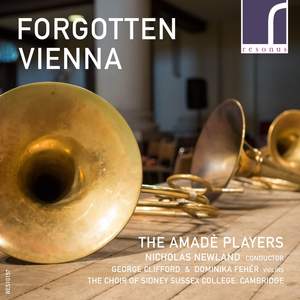 Vanhal: Symphony in A Minor

London-based period instrument ensemble, The Amadè Players, with their artistic director and conductor Nicholas Newland, make their commercial recording debut on the Resonus Classics label with this innovative and fascinating programme of works from unjustly neglected composers of the early classical era.

Inspired by Newland’s original research into the period, the group explore composers who inspired and cultivated innovation in eighteenth-century Vienna. Alongside Haydn and Mozart, these composers revolutionised the symphony in particular, while making drastic impacts on the concerto and sacred vocal genres.

With concertos from violinists George Clifford and Dominika Fehér, The Amadè Players are also joined by the Choir of Sidney Sussex College, Cambridge (dir. David Skinner), for the Requiem Mass in E flat major by Johann Baptist Waṅhal.