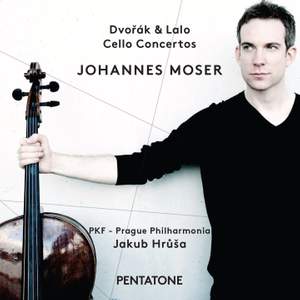 Moser gives us an exciting, high-tension ride with an impressive sense of structure. He's a musician of alacrity, power and style: virtuosic passages benefit from his fleet effortlessness. — BBC Music Magazine, December 2015 More…

For his debut album with PENTATONE Johannes chose to record the pinnacle of the repertoire for cello and orchestra, the concerto by Antonín Dvořák. In this monumental work Dvořák explores the entire spectrum of human emotion, very much inspired by his own experiences, ranging from exhilarating bursts of life in New York City to the devastating tragedy of his unfulfilled love. In preparation for the recording, made with the PKF-Prague Philharmonia, Johannes Moser and conductor Jakub Hrůša had Dvořák's own manuscript at hand in order to come closer to the composer's intention rather than relying on unquestioned traditions and acquired habits, while paying tribute to the concerto's nickname, "Dvořák's 10th Symphony".

Moser completes his debut album with the Cello Concerto by Édouard Lalo. It is a work of great verve which fully embodies Spanish flair combined with romantic spirit. Besides being staples of the Romantic cello repertoire the two works have a lot in common. Johannes Moser says about the two concerti: "The unifying motif between these two Cello Concertos is a sense of yearning: From America, Dvořák yearned for his homeland and an unfulfilled love, whereas Lalo yearned for the typically Spanish flair and the Mediterranean temperament".

Moser gives us an exciting, high-tension ride with an impressive sense of structure. He's a musician of alacrity, power and style: virtuosic passages benefit from his fleet effortlessness.

With rhythmically taut and well-drilled orchestral support under Jakub Hrůša, Johannes Moser projects a full tone with no loss of presence when he ventures among the instrument’s higher reaches...The recorded sound is, like the playing, absolutely top-notch...this new version is up there with the best of them and could happily serve as a credible first choice.