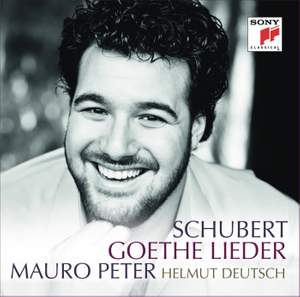 he sings this selection of Schubert's Goethe settings with keen attention to detail, youthful spontaneity, and an ample, attractive sound that is reminiscent of the fine-grained tone of baritone... — BBC Music Magazine, January 2016, 5 out of 5 stars More…

In August 2014 young Swiss tenor Mauro Peter gave a highly acclaimed Lieder recital at the famous Schubert festival "Schubertiade" in Schwarzenberg, Austria.On the program: famous Schubert songs on poems by Johann Wolfgang von Goethe. Such was the succes, that Swiss radio DRS2 Kultur immediately took the decision to record this unique recital and asked SONY CLASSICAL to participate in a co-production of the album.

Born in Lucerne, Switzerland, Mauro Peter received his musical training with the Luzerner Singknaben, at the Hochschule für Musik und Theater München with Fenna Kügel-Seifried, and in Helmut Deutsch's Lied class. In 2012 the young tenor was the winner of Peter Schumann Competition in Zwickau, where he was awarded the 1st Prize and the Audience prize. From the 2013/14 season, he was a member of the Zürich Opera House, where his debuts as Ferrando in COSI FAN TUTTE and Don Ottavio in DON GIOVANNI, both in a concert version at the Theater an der Wien under Nikolaus Harnoncourt in spring 2014 were a tremendous success.

he sings this selection of Schubert's Goethe settings with keen attention to detail, youthful spontaneity, and an ample, attractive sound that is reminiscent of the fine-grained tone of baritone Olaf Bär. The potential in his voice is immediately felt...Deutsch's playing is crisply voiced and textually alert throughout...teacher and pupil achieve performances that combine playfulness and sophistication.

it is the apparent straightforwardness of approach that Mauro Peter and Helmut Deutsch bring to these wonderful songs that help make this collection so enjoyable. The young Swiss tenor's voice, a bright lyrical instrument perhaps more steely than honeyed in its core, is as clean and unaffected as his manner…for fresh, intelligent and natural Schubert this disc can be heartily recommended

he and Jonas Kaufmann have a lot in common. Peter’s voice is beefy, gleaming yet burnished – not a million miles from the young Kaufmann’s, though Peter’s comfort zone lies a notch higher...his assured delivery holds the attention throughout. Perhaps, like Kaufmann, at this early stage of his career, Peter is not yet the Lieder interpreter he will be. But what there is here is ample to be going on with.

As he showed in a recent Schöne Müllerin on Wigmore Hall live, Peter is blessed with a winning combination of rich, multi-shaded voice, penetrating insight and a genuine freshness of approach. Well-known songs emerge newly minted, while less-familiar items are delightfully done.