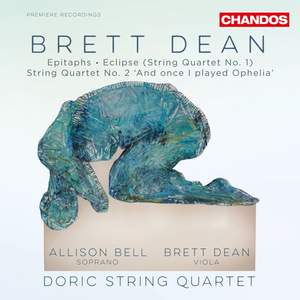 Allison Bell's genuinely affecting performance is backed by the Doric Quartet's expressionist scampering and sustained harmonies, the strings occasionally coming to the fore in the manner of... — BBC Music Magazine, November 2015 More…

I. Only I will know

II. Walk a little way with me

V. Between the spaces in the sky

I. Slow and spacious, secretive

Dean, B: String Quartet No. 2, "And Once I Played Ophelia"

Australian composer and violist Brett Dean has won many prizes for his orchestral and chamber compositions, including the most renowned of them in 2009, the Grawemeyer Award. Today his works are performed all over the world and highly praised for their aplomb and power of expression as well as their ready accessibility to listeners.

The three works featured here were composed between 2003 and 2013 and are all Premiere Recordings. They highlight the empathetic side of Dean: if Eclipse is an evocation of the refugees saved during the "Tampa Crisis", the five movements of Epitaphs are individual obituaries for lost friends of Dean'ss. A viola player with the Berlin Philharmonic for fourteen years, Dean joins the Doric String Quartet in the latter, a string quintet with two violas.

In the Second String Quartet, Dean presents Shakespeare's Ophelia not as a passively suffering victim but as a 'feistier personality, full of passion and agility. This is echoed by the great variety of vocal facets required of the soprano here. Young yet already internationally famous and much awarded, Allison Bell will perform next year at Shakespeare's 400th Anniversary Gala, directed by Simon Callow at the Royal Festival Hall in London

Allison Bell's genuinely affecting performance is backed by the Doric Quartet's expressionist scampering and sustained harmonies, the strings occasionally coming to the fore in the manner of a Schumann-style song postlude.

These recent works by the Australian composer are infused with haunting, anguished themes.

All three works get powerfully immediate readings from the Doric Quartet, continuing its varied schedule for Chandos, with Allison Bell fearless in the Second Quartet's histrionic writing. Excellent sound, decent annotations and a valuable addition to the Dean discography.

It is impossible to talk about the chamber music of the Australian composer Brett Dean without mentioning that he was principal viola of the Berlin Philharmonic. Inevitably he understands string textures from the inside, with compelling results. The excellent Doric Quartet rise to the challenges of these elegiac works.