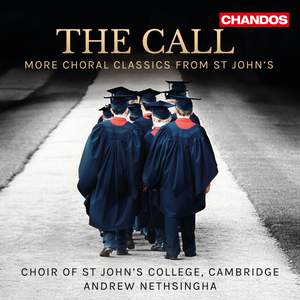 Anybody with deep affection for the more noble anthems of the Anglican tradition will need no excuse to grab a copy of this tasty selection, especially so when it features performances of such... — Gramophone Magazine, October 2015 More…

Guest, G: Two Anthems for Rememberance: I. For the Fallen

Parry: My soul, there is a country (No. 1 from Songs of Farewell)

O for the wings of a dove. Con un poco più di moto

Bullock: Give us the wings of faith

Parry: And Did Those Feet

The pieces brought together on this CD range widely, from ceremonial works associated with affairs of state to intimate compositions addressing moments of great personal significance. Two of the three pieces by Parry best exemplify this contrast: if I was glad – written for the coronation of Edward VII and premiered in chaotic circumstances – fits into the former category, ‘My soul, there is a country’ (from Songs of Farewell) – composed in the year of his death – belongs in the latter. The composers are similarly diverse. They include an English composer of Polish extraction (Panufnik), an Italian who spent most of his life in Paris (Rossini), an Irish and a German composer who, in their different ways, became leading lights in English music (Stanford and Mendelssohn).

However, all the works recorded here have one thing in common: they are all considered quintessential to the Anglican choral tradition of yesterday and today.

Anybody with deep affection for the more noble anthems of the Anglican tradition will need no excuse to grab a copy of this tasty selection, especially so when it features performances of such tasteful restraint…the unfolding of Holy is the true light is perhaps the most magical moment on a disc which offers, in truth, 75 minutes of utter aural sublimity.