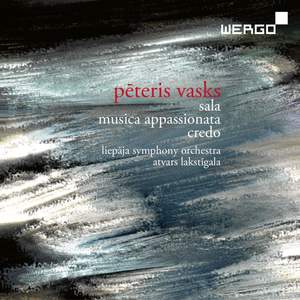 Aesthetic games as ends in themselves are far from the mind of the Latvian composer Peteris Vasks. He believes in 'Art for mankind' rather than ;Art for art’s sake'. He sees his music as a language of the soul: “Music is indefinable, it is true, but sounds are able to express spirituality. This cannot be expressed in words...This is why I try to preserve a ray of light in my sounds." 'Sala – Island' was commissioned by the Magnum Opus Project of three orchestras in California. 'Musica appassionata' begins – which is unusual for Vasks – loudly and resolutely. The strings rise to a collective climax, which at the dynamic high point unexpectedly breaks off. All that remains is contemplation and a silent prayer. The composer wrote in the programme for the premiere of 'Credo' in 2010: “‘Credo’ is crowned by a hymn-like song of praise for the almighty power of love. After a high point, the intensity of the orchestral sound gradually recedes. [...] Slowly the mood becomes more peaceful, and the piece fades away with a radiant melody.”