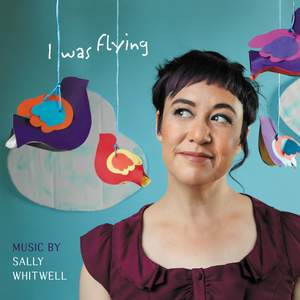 Sally Whitwell: I Was Flying

Whitwell: Some World Far From Ours

Whitwell: In the Deep Heart's Core

Whitwell: To Your Shore

Whitwell: She Walks in Beauty

Dual ARIA-Award-winning pianist and composer Sally Whitwell returns with the first-ever album of her own compositions, 'I Was Flying.'

The album combines works for solo piano with music for choir and for solo soprano, as well as a range of instrumental chamber music. Sally is joined by a number of her musical friends: rising-star soprano Alexandra Oomens, VOX (Sydney Philharmonia's choir for 18-30 year olds, with whom Sally frequently works and performs), the Acacia Quartet, flautist Sally Walker and violinist Kirstin Williams.

Sally's solo piano music forms the backbone of the disc. Best-known for her acclaimed albums of music by Michael Nyman and Philip Glass, Sally's music inherits these composers' minimalist feel, but imbues it with colour and style that is all her own. Her writing for voice - whether the Alexandra Oomens' solo soprano or VOX - centres around a close symbiosis of word and music, creating vivid and imaginative sound worlds.

Accordingly, the vocal works on the album set words from a wide variety of authors, from poets of the Romantic canon to contemporary Australians: Lord Byron, Christina Rossetti, Percy Bysshe Shelley, Monique Duval, WB Yeats, Michael Rosen, Michael Dransfield, and Sally herself. Many of the compositions draw on Sally's relationship with her partner Glennda; but the album roves across a number of subjects, including musical ruminations on an immigrant life, the Sydney to Newcastle train journey - and works inspired by Sally's relationships with the musicians on the album.