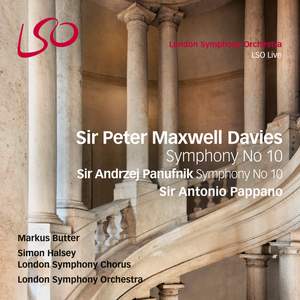 LSO Live presents the world premiere recording of Sir Peter Maxwell Davies’s architectural 10th Symphony, alongside Sir Andrzej Panufnik’s Symphony No 10. This release showcases two of the 20th century’s most iconic symphonic composers, paired together here by their 10th Symphonies. Regarded as one of the foremost composers of our time, Sir Peter Maxwell Davies has made a significant contribution to musical history through his wide-ranging and prolific output. Commissioned by the LSO and described by the composer as "the wildest music I’ve ever written", Symphony No. 10 tells the story of 17th century architect Francesco Borromini, who suffered much criticism for his idiosyncratic buildings and tragically committed suicide. Borromini’s architectural and mathematical principles permeate the symphony, a work that speaks of creativity, life, death and renewal.

Conductor Sir Antonio Pappano has spoken of his admiration for the piece and its composer: "When he described the piece to me and its dramatic content then I was drawn very strongly to it. Max wrote most of this piece in hospital. He was diagnosed with leukemia and was undergoing treatment for a long period of time, so the piece is very strong with tremendous pathos… it gives the piece a power and a sureness of knowledge."

As with many of his other works, Panufnik’s succinct offering is influenced by geometry – the Fibonacci series in this instance. The sym-phony achieves its supreme sound quality through the combination of various groups of instruments, with Panufnik allowing each grouping to convey humanity and an intense, profound musicianship. This recording was made during Panufnik’s Centenary year and supported by the Adam Mickiewicz Institute.

this is a well-prepared and satisfying performance and remarkably accurate for such a complex work … the chorus and orchestra are quite brilliant...I had not thought of Pappano as interested in championing new works and was very pleased with his assured conducting and obvious commitment.