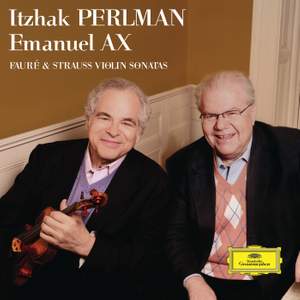 Far from imposing a misty-eyed, old-world maturity on this glorious music, [Perlman and Ax] sound as though they are discovering the music's special qualities for the first time…yet the revelation... — BBC Music Magazine, December 2015 More…

This project brings Perlman together with his longtime friend and collaborator, Emanuel Ax, for performances of sonatas by Gabriel Fauré and Richard Strauss – both works, which are new to Perlman’s discography.

Along with the new release, Deutche Grammophon has issued a 25-CD box set which includes the violinist’s entire catalogue on the DG and Decca labels.

Perlman’s status as an international star was solidified in 2008 when he was honoured with a Grammy Lifetime Achieving Award for excellence in the recording arts. During his illustrious career Perlman has also won 15 Grammy Awards, 4 Emmys, a Kennedy Center Honor, a National Medal of Arts and a Medal of Liberty.

Far from imposing a misty-eyed, old-world maturity on this glorious music, [Perlman and Ax] sound as though they are discovering the music's special qualities for the first time…yet the revelation here is a performance of the Strauss Sonata's central Andante, which creates the impression of two old chums improvising (magically) without a care in the world. Forget the meagre playing time, this alone is worth the price of admission.

It’s a real pleasure to find that Itzhak Perlman, after an absence of some years from the recording studio, has lost none of his peerless abilities as violinist and musician. He and Emanuel Ax make a splendid partnership, giving commanding, thrilling performances…[their] evident enjoyment in the music is quite irresistible.

This is vintage, songful Perlman: each line in the Fauré and Strauss sonatas is beautifully drawn and meticulously judged and everything overlain with an attractive patina of age and experience...it’s as though these two veteran performers are taking a wistful look back over long and eventful careers, while still excited by the possibilities to come. A disc to treasure.