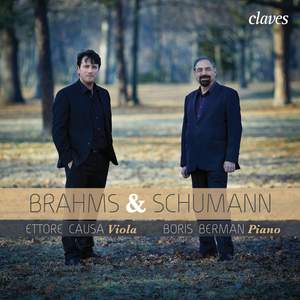 It was standard practice in the 19th century to expand the possible target public for a work by issuing it in arrangements for different instruments. Thus Schumann’s publisher already issued alternative parts for violin or cello with the first editions of his wind duos, obviously with Schumann’s full consent. Had the viola enjoyed the same popularity in the mid-19th century that it does today, then Schumann’s publisher would undoubtedly have included alternative viola versions too. Let us not forget that Brahms himself stipulated that his late clarinet sonatas could be performed by the viola instead; and even the early Cello Sonata recorded here was soon issued by Simrock in a piano duet arrangement made by Brahms’s trusted editor Robert Keller. Our 21st-century notions of “authentic” performance are thus not identical with “authenticity” as Schumann or Brahms would have understood it. Performing their chamber music in arrangements for other instruments – in our case the viola – is thus not just “authentic” in terms of the 19thcentury, but in fact in the spirit of the composers themselves, who never hesitated to allow idiomatic arrangements of their works in order to bring them to a broader audience.