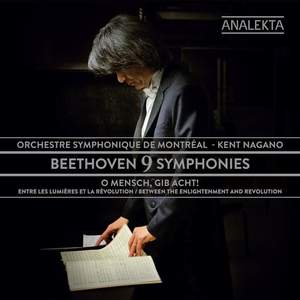 Between The Enlightenment And Revolution

Beethoven: The Creatures of Prometheus, Op. 43

In the years 1800-1830, the interplay of internal social forces and the new order in Europe created significant changes in people’s experience and values, and formed a new image in the contemporary consciousness, based on themes inherited from the Enlightenment, apprehended afresh in a new image of humanity and a new representation of society and the world. It was for this “new humanity” that Beethoven composed his music, and in it he saw his duty as an artist and the ultimate truth of his art.

This is especially true of his nine symphonies, recorded here by the OSM, conducted by Kent Nagano.