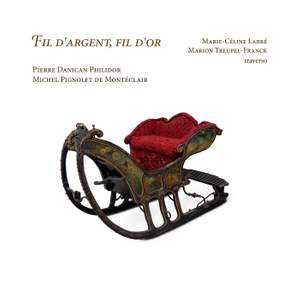 For this second recording devoted to French Baroque music for two solo transverse flutes, Marie-Céline Labbé and Marion Treupel-Franck perform the six suites by Pierre Danican Philidor (1681-1731), pieces taken from the three collections published by the composer in Paris in 1717 and 1718. Written in a highly original style in which one senses the spirit of freedom blowing over Versailles and France during the regency of the Duke d’Orléans, these short suites, in addition to the principal dances in vogue at the court of Versailles in the early 18th century, each comprise a fugue.

A few brunettes by Michel Pignolet de Montéclair (1667-1737) round out the programme. The brunette, a little rustic song with an evocative title, was a musical genre quite popular in the late 17th and early 18th centuries. The selection proposed here will enable the listener to discover another facet of the work of Montéclair, the composer who was the object of the two flautists’ first recording.