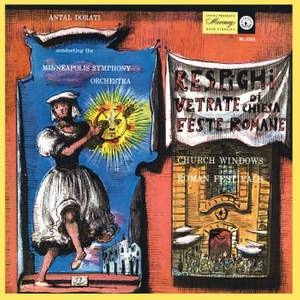 1. The Flight Into Egypt

Roman Festivals and Church Windows were both recorded on November 20, 1954, on the stage of Northrop Auditorium, Minneapolis, using a single Neumann U-47 microphone and a Fairchild full-track quarter-inch tape machine running at 15 inches per second. The orchestra was placed in normal concert set-up and the microphone kept in one position during the recording. First-generation master tape used for CD remastering. The pieces were first released on MG50046.