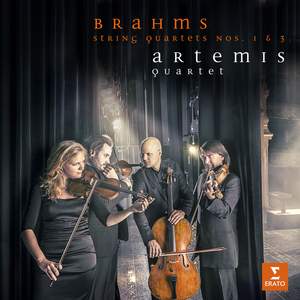 The emotional palette is broad: surging intensity is balanced emotionally by tenderness, delicate sensitivity, and…even by touches of humour. But the balance is architectural too. It may be a... — BBC Music Magazine, December 2015 More…

The Artemis Quartet pairs Brahms’ intense first quartet with his lighter-spirited third quartet, both works that the Artemis’ cellist, Eckart Runge, describes as “remarkable and multi-faceted”. He says that “Brahms marries a Romantic spirit with the structure and forms of Classicism. There is an almost symphonic approach in the writing, but at the same time the quartets are imbued with a sense of warmth, immediacy, friendship and love that is interwoven with a more spiritual, timeless beauty”.

Ever aware of the shadow of Beethoven, Brahms was 40 years old by the time he completed the first of his three published string quartets (op 51, No 1) in 1873; he is thought to have destroyed the 20 or so quartets that he had written previously. The third quartet (op 67) followed in 1875, the year before the premiere of the composer’s Symphony No 1, and a decade after the publication of his piano quintet, which the Artemis Quartet has recorded with Leif Ove Andsnes (Erato, 0094639514328).

“Brahms wrote three remarkable, multi-faceted quartets and we have recorded the first and third here,” continues Runge. “They were long considered to be quite conservative because their structure and thematic workings are in the tradition of Beethoven, but no less an innovator than Schoenberg called Brahms a ‘revolutionary traditionalist’ and saw these quartets as modern in their conception.

“These quartets are fantastic – full of ideas, contrasts and emotion. They are challenging to play – especially No 1 – because there is so much thematic material ... there is nothing in there that is not important. As players, you have to work out all the material, and the musical structure is deep and complex, while the textures can become dense with Brahms’ characteristic use of polyrhythms ... But at the same time you need to maintain transparency so that the audience can readily appreciate what it is hearing. This might be intellectual music, but its beauty should still give you goose bumps!

“The quartet No 3 doesn’t have the same dramatic weight as No 1 – it is characterised by a certain lightness and playfulness and is perhaps less ambitiously conceived than quartets No 1 and No 2 ... maybe, by this point, Brahms was less preoccupied with showing the world that he could cope with Beethoven! It’s gentler and more easy-going. Perhaps you could say that it feels more like a late composition. But there are some astonishing things going on ... the Mozartian opening theme; the way the first movement is quoted in the last movement; the prominence given to the viola in the third movement. The work’s basic character is friendly, but it has lots of interesting, audacious ideas.

“In all this, Brahms marries a Romantic spirit with the structure and forms of Classicism. There is an almost symphonic approach in the writing, but at the same time the quartets remain concise ... and imbued with a sense of warmth, immediacy, friendship and love – a feeling of Gemütlichkeit – that is interwoven and combined with a more spiritual, timeless beauty. There’s an eternity of line in the slow movements. It is music that embraces you, but it also music that has a higher perspective and which feels very complete.”

The emotional palette is broad: surging intensity is balanced emotionally by tenderness, delicate sensitivity, and…even by touches of humour. But the balance is architectural too. It may be a slightly partial view of Brahms, but it's hard to deny that the cap fits, that performances in which this music speaks so effectively and so consistently are infrequent, and that questions of whether either work represents 'real' quartet writing have rarely seemed less relevant.

the Artemis give us a Brahms of and for our time, inevitably informed by their work on Bartok and Ligeti just as much as on late Beethoven…[they have] taste and sense in abundance, and we could count ourselves very lucky to hear nowadays a performance of the C minor Symphony that matched this recording for its urgency and discretion of response.

As the excellent German group the Artemis remind us, the C minor is the composer at his most compelling and passionate, with complex, pulsating cross-rhythms, daring changes of key and expressive melodies. The later, more playful B flat also receives a fine performance, at once dynamic and subtly flexible.