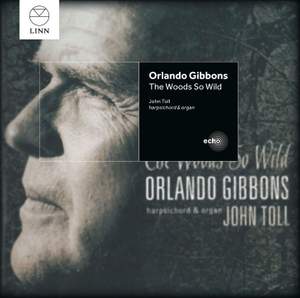 The Woods So Wild

No. 7, Fantasia for Double Organ

Originally released in 2001, Gibbons: The Woods So Wild has been re-issued as part of Linns ECHO series which offers a second chance to enjoy the best of the labels award-winning catalogue.

A great keyboard virtuoso, Gibbons was also a fine composer of the Elizabethan golden age.

Gibbons writing displays a balance of phrasing and a fine sense of texture; the 24 pieces on this recording have been selected as illustrative of the core of this repertoire.

The Fantasias are the most remarkable group of pieces, and are the ones where Gibbons best displays his contrapuntal skills, displaying techniques that clearly influenced the next generation of composers.

Highlights include the title track, the Lord Salisbury Pavan and Galliard, and the famous Fantasia for Double Organ.

John Toll was an organist and harpsichordist with a reputation for excellence in the field of early music who sadly passed away in 2001.

Through dozens of recordings and countless concerts he established a reputation as one of the best keyboard continuo players anywhere.

The art of adding harmony to a bass line to enhance its essential role in the music of the 17th and 18th centuries has rarely been more comprehensively mastered, or better taught.

Toll was also the first-choice keyboard player for Andrew Parrott's Taverner Players and Roger Norrington's London Baroque/Classical Players. As the early music world developed in the 1980s and 1990s Toll became an ever more central figure.

He co-founded Romanesca with the lutenist Nigel North and the violinist Andrew Manze, thus helping to launch the career of one of the more recent stars of the early music scene.