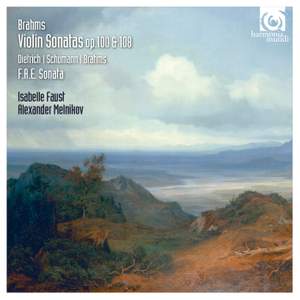 [a] beautifully balanced performance, and the warmth and intimacy of the recording is an excellent match. — CD Review, 5th September 2015 More…

A 19th-century ‘trio sonata’. Isabelle Faust and Alexander Melnikov have already given us an acclaimed version Brahms’s First Violin Sonata, in 2007. They now complete the cycle with the other two sonatas of 1886 and 1888, and add a fascinating rarity dating from 35 years earlier: the ‘F-A-E’ Sonata, a collaborative effort by three composers in honour of the great violinist Joachim, who had to guess who had written which movement! He did so with ease, for the Scherzo is as eminently Brahmsian as the Intermezzo and Finale are Schumannesque. Alexander Melnikov will be contributing his take on a score his mother gave him that belonged to Sviatoslav Richter in September BBC Music Magazine.

[a] beautifully balanced performance, and the warmth and intimacy of the recording is an excellent match.

Isabelle Faust and Alexander Melnikov (playing an 1875 Bösendorfer) make a strong case for the work as a whole, though even their impassioned advocacy can’t quite save Dietrich’s opening movement from sounding long- winded. In Brahms’s Second and Third Violin Sonatas, the players’ sound world may be a little too muscularly lean for some tastes. Still, the musical argument is always lucid.

One of the most interesting duos in many years, Isabelle Faust and Alexander Melnikov explore the richness of two late Brahms sonatas on period instruments and in an historical informed manner. Their most sensible and beautifully balanced sound also enriches the ‘F-A-E’ Sonata, a collaborative effort by three composers in honour of Joseph Joachim.