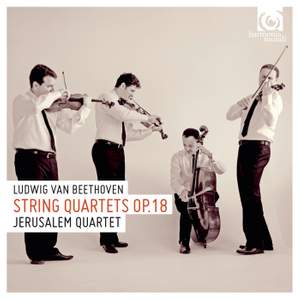 Some quartets choose to stress the continuity with the recent past, others to dig out signs of things to come. The Jerusalem Quartet strike a particularly fine balance. We are always aware of... — BBC Music Magazine, October 2015 More…

"Only now have I learnt how to write quartets properly"

So wrote Beethoven in 1801, having just finished his first set of string quartets at the surprisingly advanced age of 30: the competition of Haydn and Mozart must have been intimidating for the young composer. But these six Quartets Op.18, which cost him great effort and extensive revision, already display much boldness and originality, from the dramatic echoes of 'Romeo and Juliet' in No.1 to the astonishing programmatic finale of No.6, ‘La Malinconia’. The Jerusalem Quartet was founded in 1993, and began its training in Jerusalem, under the direction of the violinist Avi Abramovitch. From 1999 to 2001 the quartet received support from the BBC (as BBC New Generation Artists), then in 2003 it was the recipient of the first Borletti-Buitoni Trust Award. The Jerusalem Quartet is now a regular guest in the world’s leading concert halls, notably in the United States where it is increasingly present. It performs with such artists as Alexander Melnikov, Lawrence Power, and Sharon Kam.

The Jerusalem Quartet record exclusively for Harmonia Mundi and their discs have been awarded with numerous prizes. Their recording of Haydn’s String Quartets won the chamber category of the 2010 BBC Music Magazine Awards and the Diapason d’Or Arte, while their release of Schubert’s Death and the Maiden Quartet received an ECHO Klassik Award in 2009 and was featured as Editor’s Choice in the July 2008 edition of Gramophone Magazine. The Quartet’s recording of Mozart’s String Quartets, released in March 2011, was Chamber Music Choice in BBC Music Magazine. The Quartet is very grateful to Daniel Barenboim who generously loans Jacqueline du Pré's ‘Sergio Perresson’ cello to Kyril Zlotnikov.

Some quartets choose to stress the continuity with the recent past, others to dig out signs of things to come. The Jerusalem Quartet strike a particularly fine balance. We are always aware of an assembly of four individuals, engaged in witty conversation, or perhaps something a little closer to arm-wrestling. Yet animated exchange can quickly yield to lyrical sweetness or pathos

The Jerusalem's Fourth Quartet is a particular highlight, from the irresistably characterful viola-playing, a first-movement development full of fire and intensity and a third movement that seems to be paced just right...They capture the very different worlds of each quartet...a triumphant addition to the bulging Beethoven catalogue.

It is hard to believe that the group have been playing together since 1993, and on the evidence of this they are team players par excellence.

From the lovely, deceptively casual opening of the D major (No 3), placed first in the set and played with captivating ease, you know that the music is in good hands. Throughout, they capture the excitement generated by Beethoven’s sheer inventiveness and his conviction that, after much revision, he had — as he said — “learnt how to write quartets properly”.

These excellent Israeli players offer richly characterized, stirring performances of these six pieces, their burnished sound notable in sections like the opening of No. 3 in D.

these are alert, intelligent and well recorded performances, always expressive, and I very much enjoyed them.