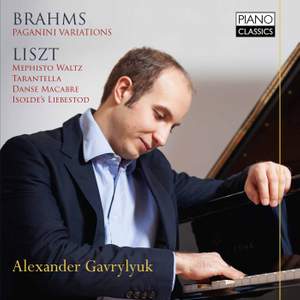 [Gavrylyuk] is a virtuoso in the fullest sense and few pianists have relished Brahms's expressive range as well as his ferocious demands in his Op. 35 more inclusively…he remains among an elite... — Gramophone Magazine, October 2015 More…

On his third album for Piano Classics, Alexander Gavrylyuk chose works close to his heart, in which his unique gifts may equally shine: his amazing technical mastery and his deep emotional involvement. Never playing for the sake of mere effect, he employs his stupendous virtuosity as a carrier of the musical content, always in service of the dramatic or poetic gesture.

Included are the famous Paganini Variations by Brahms (his most virtuosic piano work), and a selection of piano works by Liszt: Mephisto Waltz, Danse macabre, Isolde’s Liebestod, Consolation and Tarantella.

Gavrylyuk, in his early thirties, plays in the most important venues of the world, with prestigious orchestras and conductors: Concertgebouw Orchestra (4 years in a row!), New York Philharmonic, Rotterdam Philharmonic, LA Philharmonic, NHK Philharmonic, with conductors like Blomstedt, Järvi, Jurowski, Vänska, Petrenko, Fedoseyev and Gergiev. His total involvement and devotion make his concerts into events, never failing to bring the audience on their feet.

[Gavrylyuk] is a virtuoso in the fullest sense and few pianists have relished Brahms's expressive range as well as his ferocious demands in his Op. 35 more inclusively…he remains among an elite able to reach out far beyond mere proficiency to the musical heart of [Brahms's] variations…[in the Liszt] Gavrylyuk is as vivid and characterful as he is dextrous. Well recorded, this album should be in every serious collector's library.