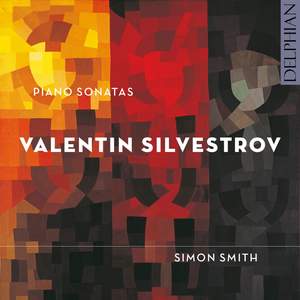 Simon Smith's engagingly performed and atmospherically recorded recital offers a fascinating insight into the composer's development from the 1960s through to the 1980s. — BBC Music Magazine, December 2015 More…

VI. Fantastic Sonatina. The Dragon and the Bird

Following his acclaimed recording of Alfred Schnittke’s complete piano music, Simon Smith urns his attention to Schnittke’s near-contemporary, the Ukrainian composer Valentin Silvestrov. Smith’s precision and technical agility make him the ideal choice for this first survey to focus on the 1970s – an important period in the formation of Silvestrov’s later style. The Classical Sonata is an ostensibly Mozartian work in which nothing is quite as it seems, while its three numbered successors provide further glimpses into Silvestrov’s unique relationship with memory and the past – this is deliberately hazy music, whose precisely notated pedal effects and nuanced half-lights leave the listener suspended, as Tim Rutherford-Johnson’s poetic and informative booklet essay puts it, ‘among glitter and the clouds’. Concluding the disc, the short Nostalghia represents the mature Silvestrov, with its yearning melodic fragments and complex emotional undertow.

Smith has performed many of the landmarks of the twentieth-century piano repertoire, most notably many of Karlheinz Stockhausen’s Klavierstücke and the Piano Concerto and complete Etudes of György Ligeti. Following a performance of the latter he was acclaimed as ‘a phenomenon – nothing daunts him, technically or musically’ (The Scotsman). For Delphian Records he has recorded solo music by James MacMillan and Stuart MacRae (twinned on Delphian DCD34009), Hafliði Hallgrímsson (DCD34051), Alfred Schnittke (DCD34131, 2 discs) and Thomas Wilson (DCD34079, in which he also joins members of the Edinburgh Quartet for Wilson's Piano Trio). More recently, with Red Note Ensemble, he has recorded chamber music by John McLeod (DCD34155) and Eddie McGuire (DCD34157).

Simon Smith's engagingly performed and atmospherically recorded recital offers a fascinating insight into the composer's development from the 1960s through to the 1980s.

In Smith’s hands, this work captivates in both moment and span