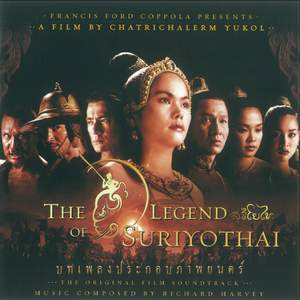 Harvey, R: The Court of Ayuthaya

Harvey, R: For the Heart of a Princess

Harvey, R: The Hand of Fate

Harvey, R: The Death of a Hero

Harvey, R: A Vision of Fear

The Legend of Suriyothai is a 2001 Thai film directed by Chatrichalerm Yukol, portrays the life of a female historical figure, who is also regarded by Thai people as the "great feminist", Queen Suriyothai. A fabled moment in the history of Thailand sets the stage for this lavishly mounted historical epic. In 1528, Thailand's leadership is in chaos, as the Northern and Southern factions of the nation declare their own kings; taking advantage of the situation, King Tabinshweti, the ruler of nearby Burma, declares his designs upon Thailand and the two countries go to war. As Thailand's independence hangs in the balance, Suriyothai stands as her nation's new champion; she rallies the Thai forces, and, travelling by elephant, leads a brave and determined campaign against the invading Burmese troops.