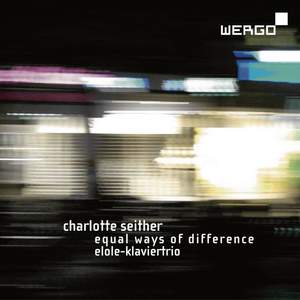 Seither: Playing Both Ends Towards the Middle

Charlotte Seither is one of the most promising German composers of her generation. She has received many honours and prizes, including the 2010 Praetorius Musikpreis for Composition and the 2012 Pfalzpreis für Musik. In August 2013, her orchestral piece 'Language of Leaving' was prèmiered by the BBC Symphony Orchestra at the Proms and was broadcast live from Royal Albert Hall. This collection of Seither's chamber music played by the Elole-Klaviertrio includes two trios, a duo for violin and cello and solo works for each of the three instruments of the group.