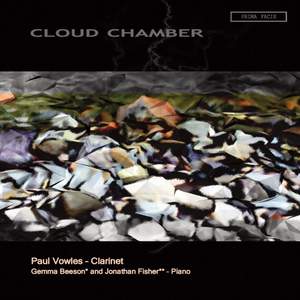 This compilation is a fascinating exploration of contemporary composition for the clarinet. The title track ‘Cloud Chamber’ by Emily Howard (“a force to be reckoned with” - The Telegraph) is a tour-de-force of imagination and technique and acts as a catalyst for the pieces around it – there is no better rendition of Richard Rodney Bennett’s sublime Duo Concertante.

Winner of the International Israeli Music Competition 2012 and finalist in the 23rd Haverhill Sinfonia Soloists Competition, Paul Vowles specialises in contemporary music. Paul studied at the Royal Northern College of Music and at the Eastman School of Music, New York. His teachers included Professor Linda Merrick, Nicholas Cox, Chris Swann, Barry Graham and Kenneth Grant. He graduated with BMus(Hons) First Class, a Post Graduate Certificate of Education and a Masters with Distinction. He was also the first clarinettist to be appointed the Giles Thomas Lyth Junior Fellow at the RNCM.

Paul made his debut at Manchester’s Bridgewater Hall in 2009 with Jonathan Fisher. He has also reached the finals of the Yamaha Federation of Music Competition, given two recitals for the BBC and recorded works by Adam Gorb for the Prima Facie Label.