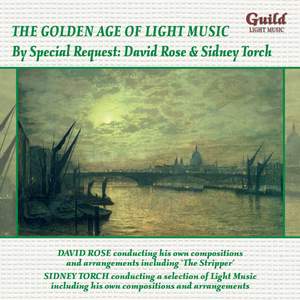 Merrill, B: Theme from Carnival

Rose, D: Serenade To A Lemonade

Porter, C: I've Got You Under My Skin (from the film 'Born To Dance')

Arnold: River Kwai March (theme from the film 'The Bridge On The River Kwai')

Coates, E: A Song By The Way

Spoliansky: Song of Capri (featured in the film 'That Dangerous Age')

The world’s capital cities have been the birthplace of many great musicians, and London, England, is certainly no exception. During the first decade of the 20th century two future Light Music ‘greats’ were born to parents who had originally sought refuge there from troubles in their homeland. David Rose was taken as a child with his family across the Atlantic to the USA where he would achieve world-wide fame for the unique orchestral sound he created, and which would influence many of his peers. Sidney Torch remained in England, and became a leading figure in Britain’s musical scene. Both excelled at composing, arranging and conducting, as their contributions to this CD will surely testify.