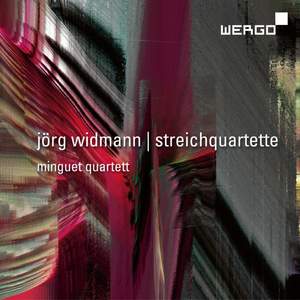 The composer Jörg Widmann is also a gifted and sought-after clarinettist. As a practising musician, he is constantly dealing with musical tradition and this influences his composing. Widmann, however, has not only examined the string quartet, he has prolonged his involvement with the genre over a period of eight years with a series of five quartets, which, though they are independent pieces, can also be viewed as a large work in five movements. The cycle of the five string quartets is juxtaposed with two early works by Widmann: as early as 1990, he wrote a short movement for string quartet as part of his school opera 'Absences' (revised in 1993). The string sextet '180 Beats per Minute' (1993) – the title comes from the tempo indication – is inspired by fast pulses of techno music.

“It is a great pleasure for me that, seven years after the first complete recording of my string quartets, the Minguet Quartet now offers a second recording. We have worked together closely for many years, particularly on these five quartets. The Minguet Quartet has also repeatedly played my quartets as a cycle on a single evening. This ensemble is therefore quite familiar as to how the individual quartets complement, contradict, and relate to each other dramaturgically.” Jörg Widmann

Widmann’s five string quartets make up a kind of meta quartet – a massive web of musical dialectics that celebrate, explode and generally redefine the genre’s lofty, loaded heritage...The Minguet Quartet does it all justice...what’s possibly most impressive is how they manage to chart the big architecture...while pouring loving attention into the intricacies of individual scores.